Whether placed on the canvas or saved as a favorite, shortcuts in Infor Smart Office provide an easy way to access the screens you need to do your daily work. They can be created in several ways and shared in many ways as well (See the topic “Using the share functionality in Infor Smart Office” in the ISO Administration Guide.)

For Lawson application screens, a shortcut can be created either to the blank form or to a specific data record. However, for a very limited number of forms, primarily in the GL subsystem and GL90.1 being the prime example, the applications do not provide sufficient key information to shortcut to individual data records.

First a little background on how the key information is provided to Smart Office. Each form typically as a field known as the ‘hidden key’ or HK in which is concatenated the key values that can be parsed by Smart Office breaking the values into their respective key fields. The shortcut would contain an HK parameter that looks like this:

Until now, Lawson shortcuts always used the HK field when constructing a shortcut. However, a second custom format of the HK is available for those screens which require additional values to inquire on a specific record. The format consists of a _DATAPARAM token together with the field names and field values. For the HK shown above it would look like this:

It has always been possible to ‘hand-craft’ a shortcut in the _DATAPARAM format, but it requires a lot of keystrokes and is not very convenient if you want to share a shortcut from the application’s Share menu.

With HF 30 (10.2.1.0.324) we have introduced a Lawson ISO role-based option to define fields that will be used to create _DATAPARM formatted shortcuts. It will still require some knowledge of the applications and the data required for a successful Inquire transaction but once the fields are identified for a token, all shortcuts created for that token will use the custom format.

To limit who can define the fields, a new role setting (Allow custom shortcut field selection) is available on the General tab on the Role Manager Maintenance screen. Then when allowed, users will see a new item on the Tools menu (Custom Shortcut Fields).

Note that even with access, many screens will not show the menu item. All batch token forms, for example, can create a valid standard shortcut. And forms which don’t allow direct transfer also don’t allow shortcut creation. 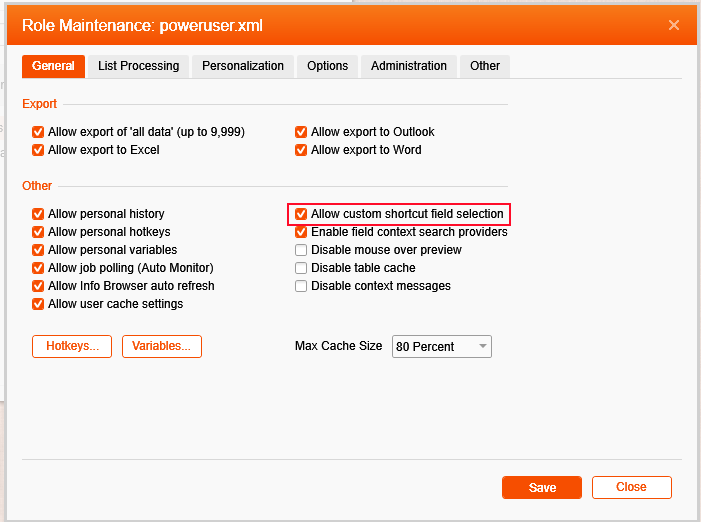 Shown below is the dialog for specifying shortcut fields using GL90.1 as an example.

The old format for GL90.1 was not sufficient to find specific data and looked like this:

With the fields defined as shown below, a GL90.1 HK will look like this: 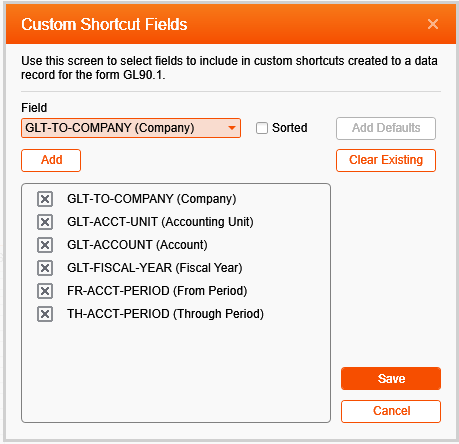 Custom shortcut fields are persisted with other Smart Office data on the Lawson application server in an XML file named for the token. The XML for the GL90.1 example is shown below and is persisted as:

Using this scheme means that the shortcut definition will be global to all users and that the shortcuts file will also be accessible in the Lawson Personalization Manager on the Other tab with the Source Type of Shortcut Files. There the files can be viewed, exported to a text editor, or deleted. 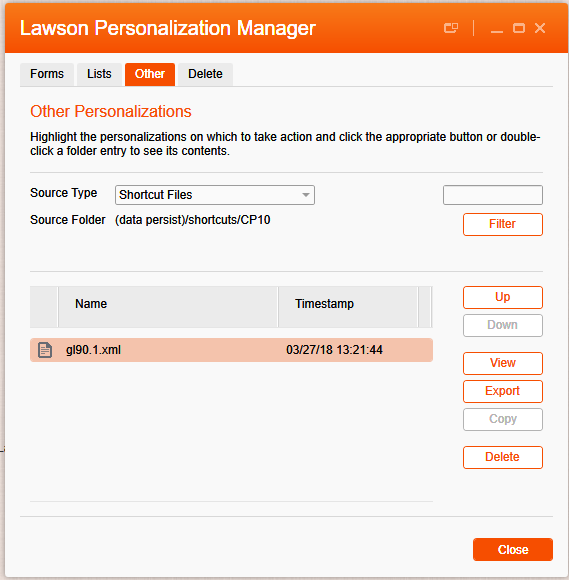