Upgrade path
Upgrading to Smart Office 10.0.4 can only be made from versions between 10.0.0 and 10.0.3. During the upgrade all roamed user data and settings file will be migrated into the GDBC database and this process can take a while. DO NOT TURN OFF Smart Office until the status is set to OK.

The upgrade process can be followed in the log file.

The picture above shows that the user 11914 is a Smart Office administrator and that all authenticated users are allowed to start the Smart Office client. 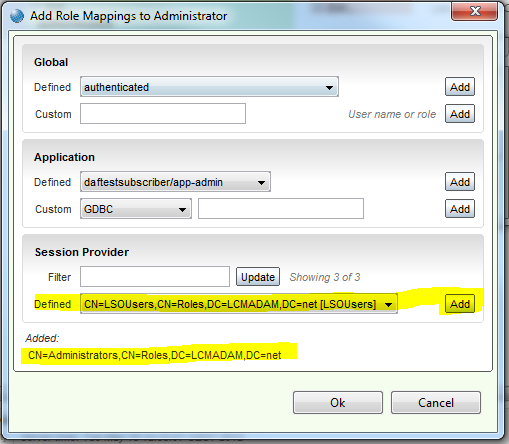 If there are no roles listed verify that the Session Provider Configuration and the user repository are correct configured.

If you already have a configured another application role in the Grid with the correct users, that role can be used as well and is selected in the Application area.

To see what a application roles you have visit the page https://<gridserver>: <https_port>/grid/user in an Internet Explorer

Remember that is it the Grid application roles that is listed and not the groups that the active Session Provider delivers.

Mango.properties is a file that very rarely needed to be changed by an administrator. In Smart Office 10.0.3 and earlier the file was located in the lib folder. From LSO 10.0.4 the file is not used anymore and the properties from the file have been moved to Grid properties.

The only property that is meant to be changed is the Retrieve display name property and it is new in version 10.0.4. Read more about the new feature in this blog entry.

to start LDAP Session Provider Editor and go to the Group Element Mapping. Use the Validate button to verify that some groups are found.

In Smart Office version 9.1.3 to 10.0.3 the Smart Office server parts consisted of four Lawson Grid node types that executed separately. Each node type where executed in a separate JVM.

In Smart Office 10.0.4 there is only one Lawson Grid node type.

This change has been made in order to reduce the amount of java processes and does not affect the functionality in Smart Office.